“Make everything as simple as possible, but not simpler.” — Albert Einstein

Your smart phone would be simpler if it didn’t have a camera. But it would also be a lot less useful. A paint can is a sublimely simple way to store paint. But it’s a dreadful way to interact with paint: It’s hard to open, hard to close, and guaranteed to make a mess every time you pour it.

Simplicity is an obvious virtue, but it is not the ultimate virtue. Sure, the fewer clicks, taps, steps, hurdles, fields, distractions, and doodads in a UI, the better. We UX designers have a whole bag of tricks for simplifying things—consolidating here, eliminating there, shrinking this, submerging that—and 19 times out of 20, the simpler approach is the better approach.

But, ahhh, that twentieth time. In our enthusiasm for making elements, widgets, and products simple, we need to avoid overshooting the target, making them too simple to serve their purpose well. For example:

Simplicity is a one-to-one match between an itch and a scratch. Fine-turning the scratch to the itch usually does mean subtracting, but not always. Sometimes it means a small addition, such as asking users whether they want that file deleted everywhere. To hit the appropriate level of simplicity, we need clarity about exactly what itch we’re trying to scratch.

The goal is not simplicity for its own sake. Simplicity is only a means to an end. The goal is ease. We can admire simplicity as a characteristic, but ease is what we want users to experience.

The goal is not simplicity for its own sake. Simplicity is only a means to an end. The goal is ease.

“Keep it simple” is a great rule of thumb but a poor reflex ideology, because of all the times it shames us into putting simplicity ahead of ease. Naturally, we want both, and they do tend to go together. But we sometimes have to lessen one to achieve the other. When we do, ease should win. As long as the result is to make the thing easier to use and to satisfy users’ actual needs, mission accomplished.

A prime way we simplify is to reduce verbiage. And sure, all things being equal, the fewer words or elements it takes to communicate something, the better. But all things are not always equal. Like making a room too cold, we sometimes overdo brevity, creating more problems than we solve. Better to use a little more verbiage to communicate clearly than to puzzle users with something concise but cryptic. Consider: 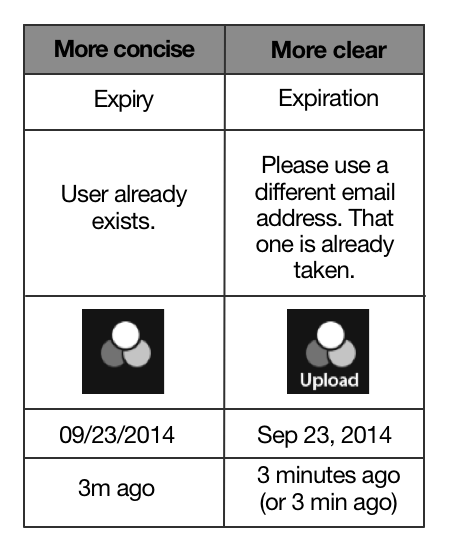 Concise action button verbiage is a particularly sacred cow. You can’t get much more concise than the standard “OK” and “Cancel.” The word “OK” itself is pristinely simple, but that simplicity comes at a price: additional effort and occasional grief. To know what you are consenting to in a dialog box, for example, you have to go to the trouble of reading the rest of the dialog. Users often don’t, so they sometimes suffer by clicking “OK” with regards to things they did not intend to. To spare them a bit of effort and grief, a self-explanatory button is more helpful than a concise button. That tends to mean a tad more verbiage.

Here’s an example of how our well-meaning insistence on bare-minimum button wording can sometimes do more harm than good:

Making the buttons self-explanatory (though less concise) can actually streamline the whole dialogue:

Is this not simpler than the original?