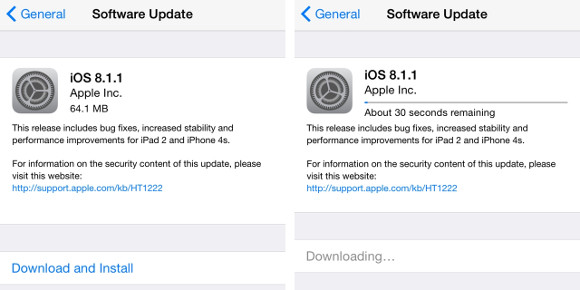 Depending on the model of the product you’re applying it to, the size will vary – but it will be around 64MB.

According to Apple, the update “includes bug fixes, increased stability and performance improvements for iPad 2 and iPhone 4s“.

Owners of older Apple devices (like me) sometimes complain (me, always) that after upgrading to new iOS versions the performance of their gadgets heavily decreases. In the case of iOS 8 (or at least iOS 8.1), this has now pretty much been confirmed by Apple itself.

So if you own an iPhone 4s or iPad 2 running iOS 8(.1), you should probably apply the update to iOS 8.1.1 as soon as possible. Hopefully it will restore some lost performance on those two devices.